Origin: Taconic received stock at F59 from NIH Animal Genetic Resource in 1998. The mice were derived by embryo transfer. Taconic’s FVB mice originated from NIH at F30 prior to 1999. FVB is a substrain of N:GP Swiss mouse which was generated at NIH in 1935. A second colony was generated for Pertussis Research and designated N:NIH(S). The mice from this colony were backcrossed eight generations (F8) and designated HSFS/N. FVB, Friend Leukemia Virus, strain B was selected for from the HSFS/N colony. The Taconic foundation colony was at F83 in 2005. 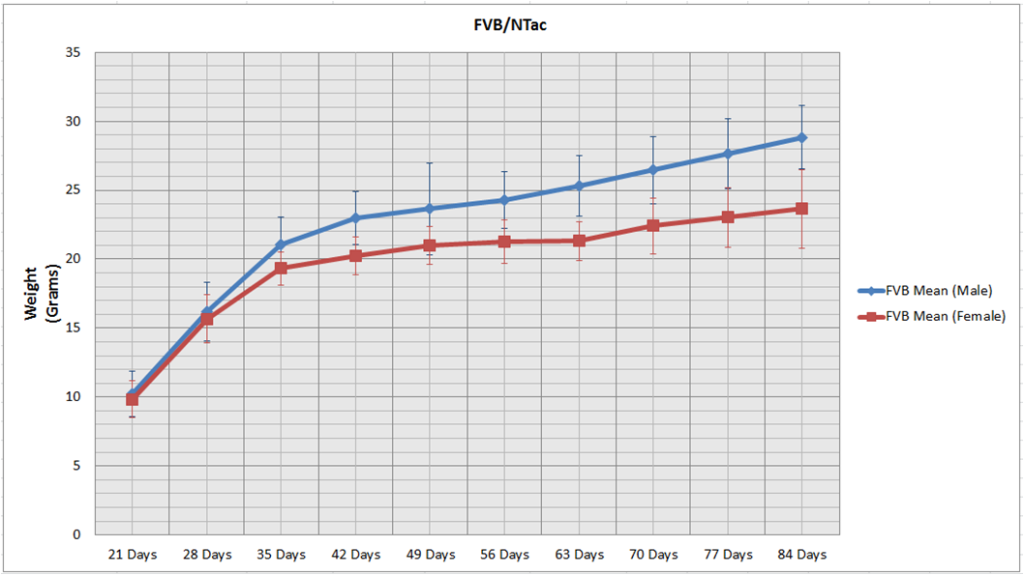 Urinalysis
All mice were fasted in metabolic cages and an overnight urine sample was collected. Urine analysis was performed using Multistix 10 SG (Bayer). Strips were read and recorded as per the manufacturer’s instructions, and the results are presented in Table 1. Mouse #19 gave an unusually large amount of urine (15ml). This mouse was markedly larger than the other females, but no abnormalities were noted.

Clinical Chemistry and Hematology
A terminal blood sample was taken from Carbon Dioxide – anesthetized mice via cardiac puncture. The collected blood was divided into two samples. One sample was treated with EDTA and stored at 4°C for hematological evaluation. Another sample was allowed to clot at 4°C for 30 minutes, and then centrifuged at 7000rpm for 10 minutes, and the serum was decanted and frozen at -80°C for clinical chemistry analysis. A slide smear was made from a single drop of whole blood. Frozen serum, chilled whole blood, and slides were delivered to LabCorp (RTP, NC) for analysis; the results are presented in Table 2. Unless otherwise indicated, serum chemistry data is generated from a Hitachi 717 automated analyzer and hematological data is generated from a Celldyne 3500. WBC differential counts are performed manually.

Necropsy and Organ Weights
All mice were euthanized and bodyweights were recorded. Representative tissues were collected, weighed, and immersion fixed in 10% Neutral Buffered Formalin. Tissues were delivered to the Taconic lab for histological preparation and evaluation. Tabulation of organ weights is presented in Table 3. The pathologist’s summary and detailed histological descriptions follow.

Discussion
All animals were thrifty on arrival and appeared clinically normal. Locomotor behavior was normal and there were no visible lesions or discharges at the mucous membranes. All tissues appeared normal on gross necropsy evaluation and weights were within normal limits. There were no unusual findings upon collection of these tissues nor otherwise observed in the body cavities.

Mouse #19 was markedly larger than the other females. Internal organs were proportionately larger as well. No other abnormalities were noted. The overall profile of these mice is consistent with expectations of a general-purpose mouse. None of the parameters are indicative of impaired system function.