Origin: Taconic received 129S6 inbred model stock from GenPharm International from two sublines originating from Dr. Martin Evan’s colony in 1992. The mice were derived by embryo transfer in 1993. The resulting offspring were heterozygous at Gpi1 for the ‘a’ and ‘c’ alleles. Homozygous Gpi-1c brother x sister mice were selected in the Foundation Colony at F8 and became the common ancestors for all subsequent Taconic breeders. The Taconic foundation colony was at F42 in 2005. 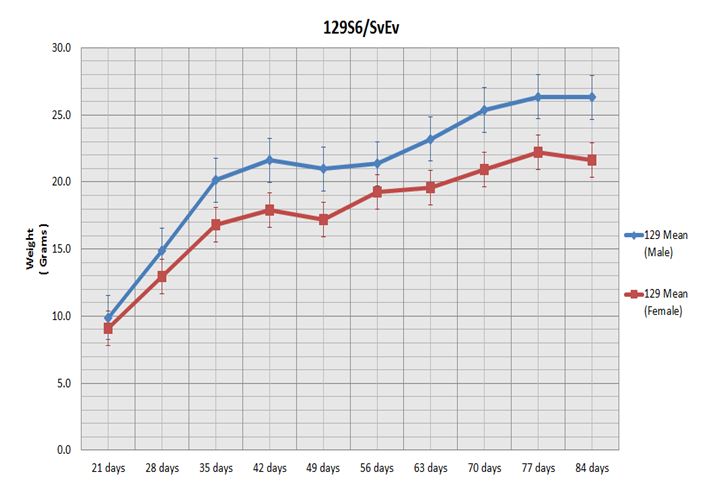 UrinalysisAll mice were fasted in metabolic cages and an overnight urine sample was collected. Urine analysis was performed using Multistix 10 SG (Bayer). Strips were read and recorded as per the manufacturer’s instructions, and the results are presented in Table 1.

Clinical Chemistry and HematologyA terminal blood sample was taken from Carbon Dioxide – anesthetized mice via cardiac puncture. The collected blood was divided into two samples. One sample was treated with EDTA and stored at 4°C for hematological evaluation. Another sample was allowed to clot at 4°C for 30 minutes, and then centrifuged at 7000rpm for 10 minutes, and the serum was decanted and frozen at -80°C for clinical chemistry analysis. A slide smear was made from a single drop of whole blood. Frozen serum, chilled whole blood, and slides were delivered to LabCorp (RTP, NC) for analysis; the results are presented in Table 2. Unless otherwise indicated, serum chemistry data is generated from a Hitachi 717 automated analyzer and hematological data is generated from a Celldyne 3500. WBC differential counts are performed manually. No blood samples were obtained from mouse #16.

Necropsy and Organ WeightsAll mice were euthanized and bodyweights were recorded. Representative tissues were collected, weighed, and immersion fixed in 10% Neutral Buffered Formalin. Tissues were delivered to the Taconic lab for histological preparation and evaluation. Tabulation of organ weights is presented in Table 3. The pathologist’s summary and detailed histological descriptions follow.